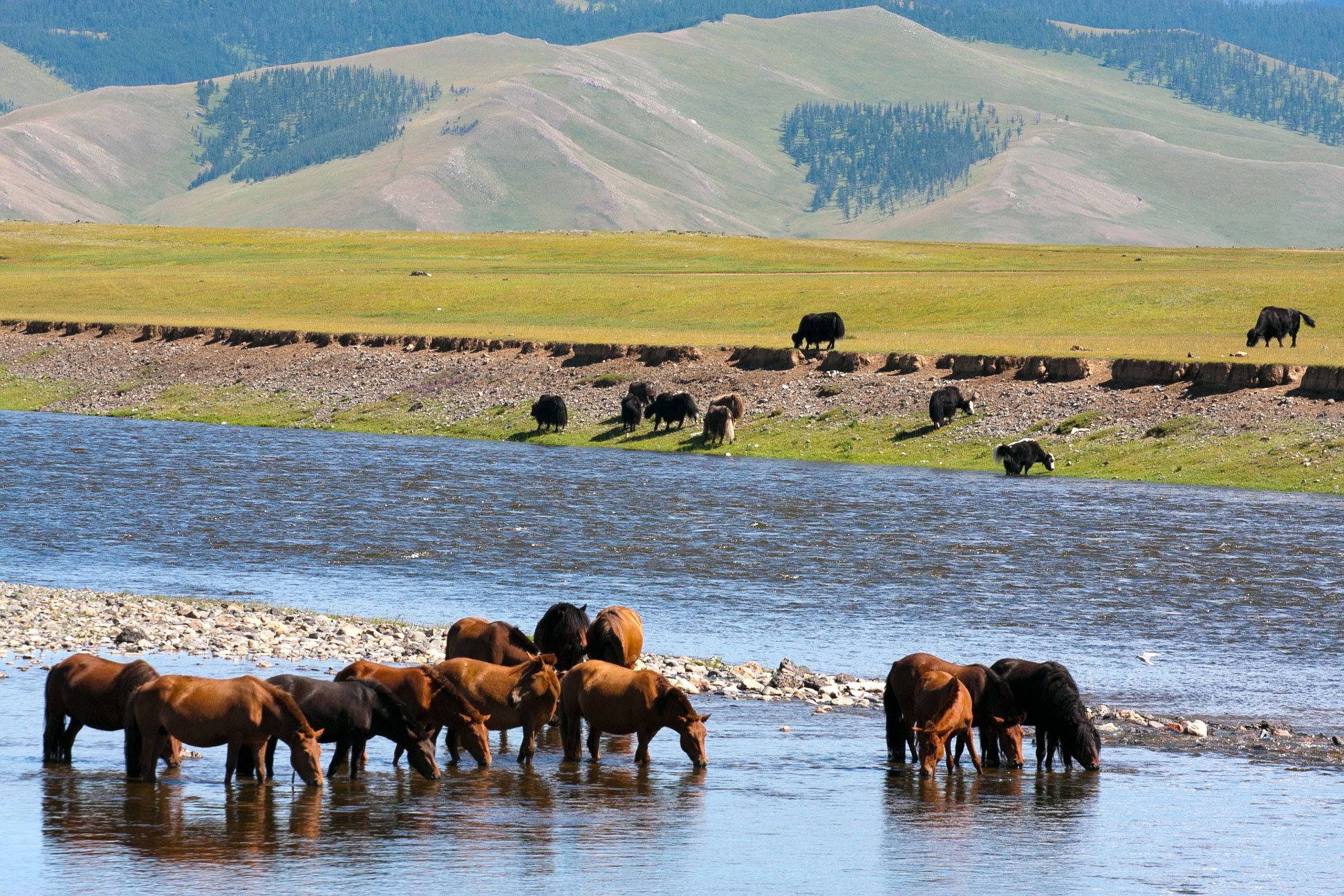 Central Mongolia is the most popular destinations in Mongolia. It is where most visitors begin their adventures, since it’s closer to Ulaanbaatar. And many recommended tour attractions, including natural landscapes, national parks, historical sites, ancient ruins, burial monuments, monasteries, and religious sites, are found in Central Mongolia, making this region a must-see region on any itinerary in Mongolia.

Even though it seems like unending stretches of empty grassland, a pleasant encounter with nomadic families who roam the plains with their livestock is common.

Central Mongolia is the heartland

Mongolia’s heartland is home to many historical sites in addition to its natural beauty, particularly in the Orkhon River Valley, which has archaeological relics from numerous millennia ago. There aren’t many remains of Kharakhorum, the Mongol Empire’s capital in the 13th century, but Erdene Zuu Temple adjacent is said to have been constructed from its ruins. Over a hundred white stupas make up the wall around this enormous monastery complex, which contains stunning Buddhist artwork and architecture.

Most popular destinations of Central Mongolia

Elsen Tasarkhai is a part of the Mongol Els sand dunes, which stretches along the Tuv, Uvurkhangai and Bulgan provinces all the way to the west to become part of the Khugnu Khan mountain range. The sand dune lies approximately 80 km long. The widest section of the sand dune is located in the Ikh Mongol mountain area and covers an area of 9-10 km2. Half of the Ikh Mongol sand is covered by plants, so it’s mostly not loose sand.

The Orkhon Valley Cultural Landscape lies in the central part of Mongolia, some 360 km southwest of Ulaanbaatar. The site covers 1,220 square kilometers of grassland along the historic Orkhon River. The site was registered by the Unesco World Heritage as a cultural landscape in 2004. This cultural site includes numerous archeological sites dating back to the 6th century and Kharkhorin, the capital of Genghis Khan’s empire in the 13th century.

Arkhangai province is famous for its many ancient volcanoes. These volcanoes and the accompanying tectonic activity play a special role for the numerous water springs and natural hot water that flows from an elevation of 1860 meters (1.16 mile) above sea level. Mongolia’s most famous hot spring, Tsenkher natural hot spring, is located in Tsenkher Soum. This natural beauty is located 27km south from Tsetserleg town, which is the central town of the Arkhangai province. Additionally, the hot spring surrounded by cliffs and rapid rivers is located between woody hills and breathtaking mountains.

The water from this geological spectacle emerges from the ground at 85.5°C (185.9°F). It is said that the Tsenkher hot spring has healing ability that assists in treating articular diseases and nervous system diseases. The spring is composed of hydrogen sulfide, sodium carbonate, hydro carbonate, sulfate, and fluorite. The Tsenkher hot springs provide a place for visitors to relax in naturally heated water-pools that are artfully nestled in a lush mountain valley. This health spa also offers indoor and outdoor baths.

Ugii Lake is a freshwater lake, located in the Ugiinuur soum of Arkhangai province. Indeed, it is one of the biggest lakes of Mongolia and has 27 km square area with an average depth of 6.64 m, in some sections 15.3 m, coastal length is 23.5 m. Ugii lake abounds in various types of fish and birds, which creates an incredible natural beauty. Ugii Lake also provides a favorable condition for research work and traveling. It attracts travelers, tourists and nature researchers from Mongolia as well as from foreign countries. Also it is enthusiastic for swimming, sunbathing, horse and camelback riding around the lake. Don’t forget to take your swimming costume when you visit Ugii Lake as the water is very warm during summer.